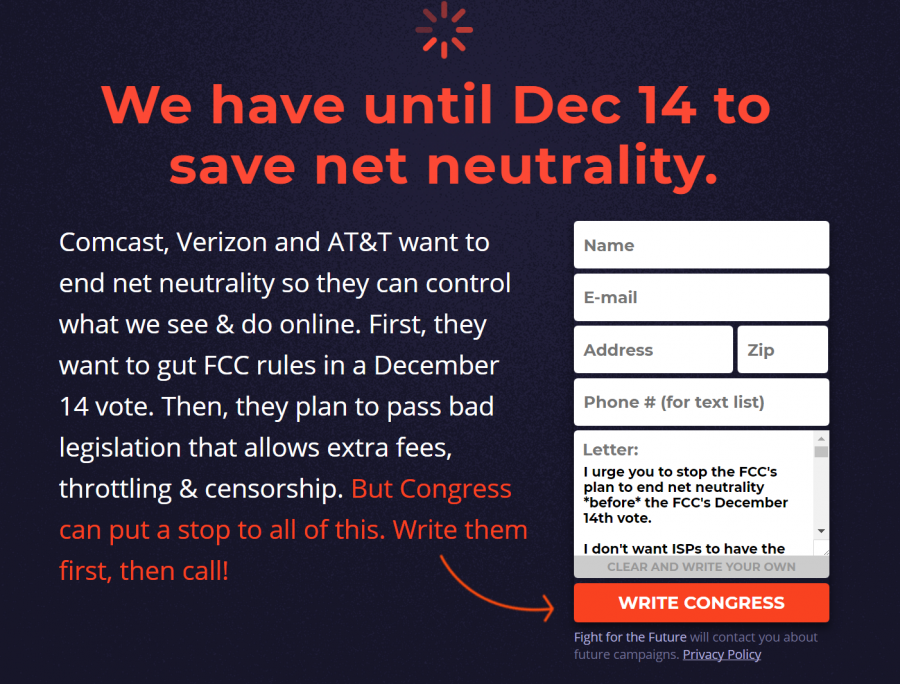 You can visit www.battleforthenet.com any time before Dec. 14 to petition Congress to keep net neutrality protection laws in place.

Imagine something similar to the school’s barracuda web filter popping up when you open Netflix because your parents only paid for news websites.

Though nothing like that could happen at this point in time, similar situations could potentially occur if net neutrality was repealed.

In recent weeks, a considerable amount of controversy has surrounded the topic of net neutrality. Although it sounds like a complicated, diplomatic issue, it actually hits much closer to home than one might assume.

According to battleforthenet.com, net neutrality is the idea that internet service providers (ISPs) should not control what can be seen and done by their customers online.

Currently, protection laws are in place in the United States to prohibit ISPs from slowing down connections to certain sites, blocking sites and offering paid prioritization to larger companies that can pay their fees.

If net neutrality was repealed, ISPs would become gatekeepers that can decide how and if their users can access different parts of the internet.

ISPs could offer packages that bundle different types of sites together, such as a social media package, an entertainment package or a news package. Each package would add an additional charge.

The five members of the FCC are to vote on the issue on Dec. 14. It is expected that the Republican-dominant commission will vote to repeal net neutrality.

This past week, hundreds of protests have taken place across the country in opposition to the news.

According to an article in the Washington Post, Pai and his family have even become targets of severe criticism and harassment after his proposition to dismantle net neutrality.

Those who feel strongly about keeping net neutrality around should not be directing their frustration toward Pai, but should instead find a more productive way to channel their anger about the subject.

By visiting battleforthenet.com, you can petition Congress and encourage them to keep the internet an open place with equal-access from the comfort of your home.