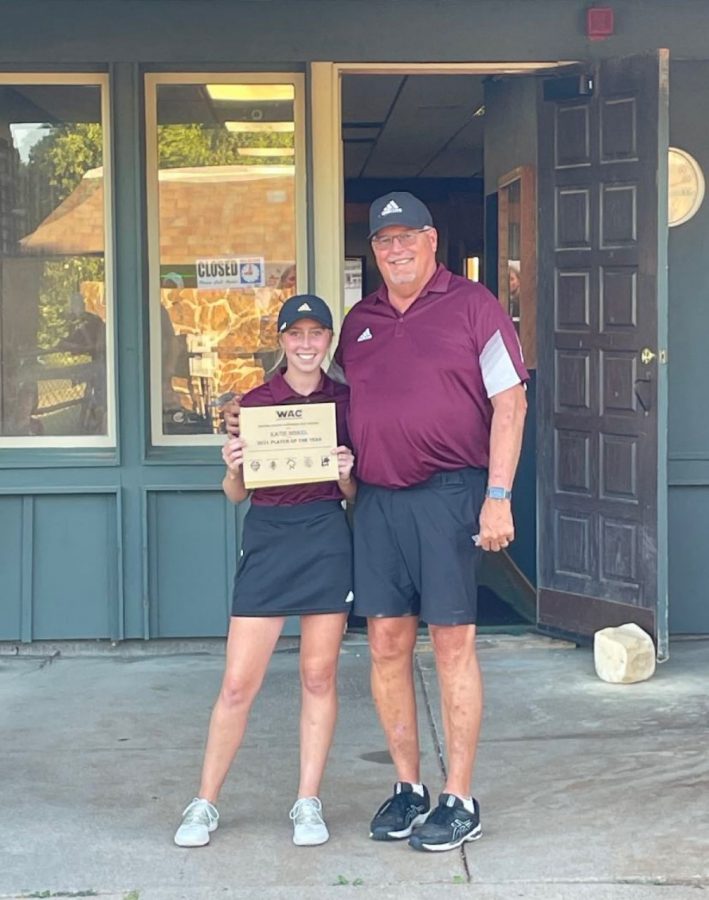 Girls golf coach Mark Watts stands with junior Katie Dinkel after being awarded WAC Player and Coach of the Year.

1. How does it feel to have won the Western Athletic Conference Coach of the Year twice and have two of your players win WAC Player of the Year?

2. What achievement (golf related) are you most proud of?

“Being able to be the coach golf at the school I played for and graduated from.”

3. What are some of your coaching techniques that you feel better the players the most?

“Teaching the importance of short game and course management.”

4. What does an average day of practice look like?

“Each practice is different.  It could be short game work (short range, chipping, putting, up and downs), long range work (long irons, hybrids, driving) [and] on-course playing (par three, five holes, nine holes) – depending on how much time there is between tournaments.”

5. Have you won WAC Coach of the Year before these past two years?

6. How long have you been coaching golf?

7. How long have you been golfing?

“I started playing golf when I was eight years old, so 57 years!”

8. What made you start golfing in the first place?

“My dad got me started when I was eight years old.”

10. How do you think that the golf programs at Hays high have changed or stayed the same?

11. What has been your most “successful” team?

“It’s hard to pick because there have been so many, and each team is different.”

12. What is one piece of advice you’d give to someone who is a new coach?

“Don’t give the player too many swing thoughts.  Also, don’t try to fix a swing that isn’t broken.  Each player is different, and each swing is different.”

13. Of all your years of coaching golf, what has been your favorite memory?

“Watching the reaction of the players and parents after they realized that they’ve won a state championship.”
23mtaggart@usd489.com