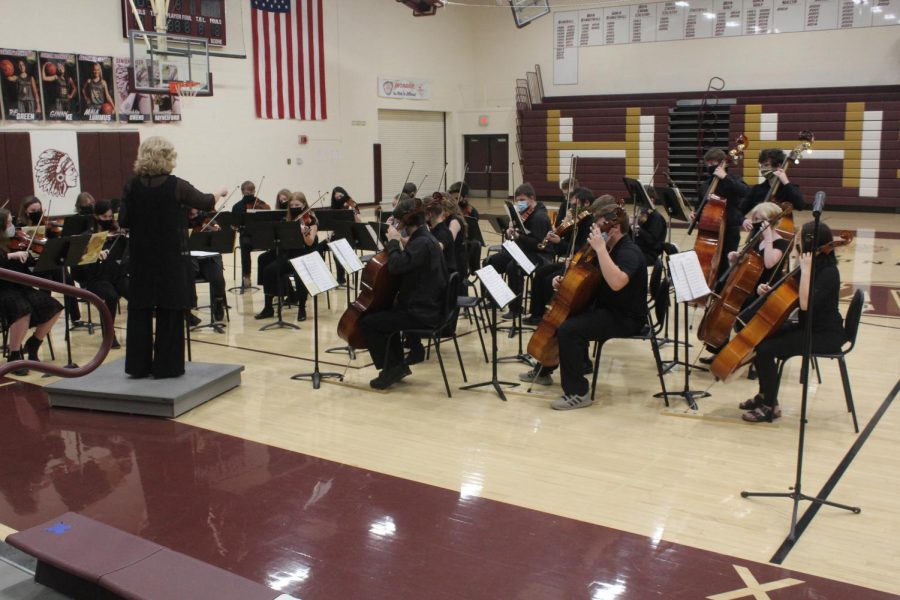 Joan Crull leads the orchestra at their winter concert.

On Monday, Jan. 11, the Hays High band and orchestra held their Winter Concert to a limited audience in Gym A.

Because of COVID-19, the concert was limited to just parents and was livestreamed to others by Tribe Broadcasting. The concert was originally scheduled in December but was moved to January due to multiple music students being quarantined.

The Hays High band performed first. The selections they played included “Radiance,” “My Bonnie Boy” and “17 Come Sunday.” After the band completed its performance, the Concert Orchestra followed with “English Carol Collage,” “Coventry Carol” and “Forever Joyful.” Then band returned with their last three pieces and Chamber Orchestra completed the concert with “Deck the Halls with Boughs of Holly, A Merry Fugue,” “Nessun Dorma” and “Passacaglia.”

In addition to the changes to the concert, music students have undergone multiple changes this year.

Orchestra instructor Joan Crull said that this is the second year Hays High has had two orchestras because there isn’t enough room for all the students to be in the room together.

“It’s nice to have smaller groups,” Crull said. “Everyone steps up and works hard because they know we’re counting on everyone doing their part.”

Even with the smaller orchestras, the students still have to separate from one another in the room due to COVID-19.

“Everyone has had to social distance in class,” sophomore Katrina Delimont said. “It definitely makes it harder to hear one another when we play.”

Other students agree with Delimont that COVID-19 has changed the band and orchestra environments.

“It has changed where we have two separate bands instead of one,” sophomore Michaela Dickman said. “We have to have these cover things over the instruments, and we have to sit six feet apart.”

“I will mention that it’s a challenge to rehearse spread out six feet away from each other,” Crull said. “Especially in the larger orchestra, the Concert Orchestra. It’s harder to hear each other and stay together, but I’m very proud of the students and how well they’ve adapted to that set up.”

Even with all the changes in class and school, most students have been finding ways to have enjoyable moments in class.

The changes made to the band and orchestra have affected students in both positive and negative ways.

“I suppose, with two bands, it increases the number of songs,” DeBay said. “Therefore, I have more instruments to progress my skills on.”

Unlike DeBay, Dickman said she dislikes the changes made; others don’t really have an opinion and are just trying to adjust.

“I’ve started to get use to the changes we’ve had to make at school,” Delimont said.