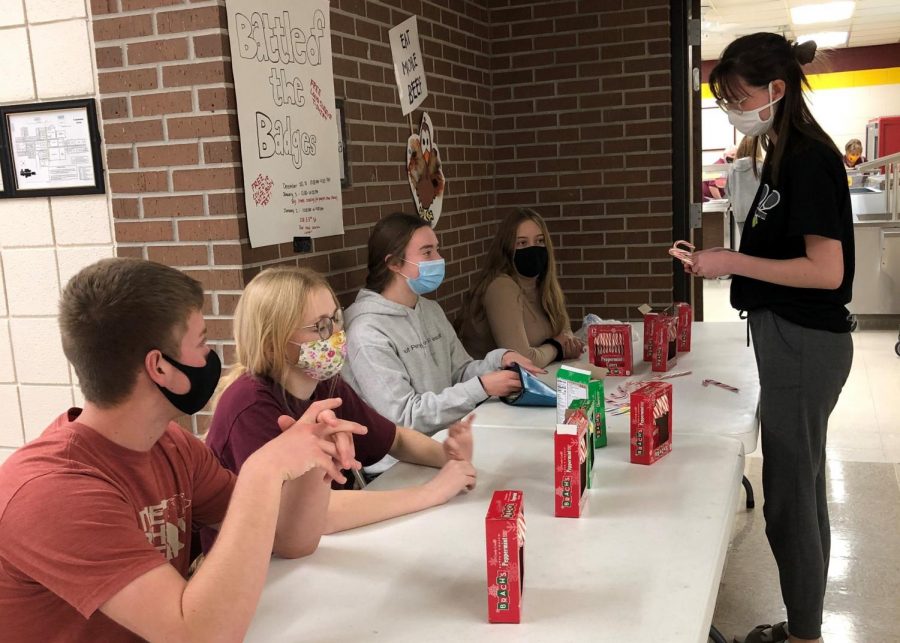 Hays High Student Council will be selling candy canes Dec. 7-11.
The candy canes are an assortment of flavors, with the most common being peppermint, cherry and blueberry.
The cost is 50 cents for one and $1 for three, with the proceeds going towards National Honor Society’s Holiday Help Project.
Sales will be during PRIDE Time in the Commons and during third period outside of the Cafeteria.
Freshman StuCo member Brynn Kinderknecht helped with sales during PRIDE Time.
“On Monday, we had a sign that had the prices, and unfortunately, it disappeared,” Kinderknecht said. “I have a feeling that attracted a lot of students.”
Despite this setback, Kinderknecht said she believes the sales are going well.
“I’ve never done this before, but I’d say the sales going well,” Kinderknecht said. “We’ve had to buy more candy canes.”
Kinderknecht said her favorite candy cane flavor was peppermint.
“From what I’ve seen, the students like the cherry or blueberry flavors the most.”
Junior Jocelyn Rigler agreed with Kinderknecht that sales are going well.
“Honestly, candy canes are pretty inexpensive, and a lot of people buy them for their friends, so just reminding them to do so helps get students to buy them,” Rigler said. “I personally think the original peppermint is superior.”
Rigler said many students like cherry ones, but peppermint is also popular.
“We have been making announcements every day and just advertising the candy canes,” senior Hope Kisner said. “So far they have gone very well, hopefully we can raise a good amount of money for the Holiday Help Project.”
Kisner’s favorite flavor is cherry.
Junior Hayli Meier also sold candy canes.
“I normally just make eye contact with people and ask them if they want a candy cane,” Meier said. “It’s really nice when you have an outgoing selling partner.”
Meier echoed Kisner’s response, with cherry being her favorite flavor.
“I had never sold anything at lunch before, but I had a great time because I got to see a lot of my friends that I don’t normally see on Gold Days,” Meier said.