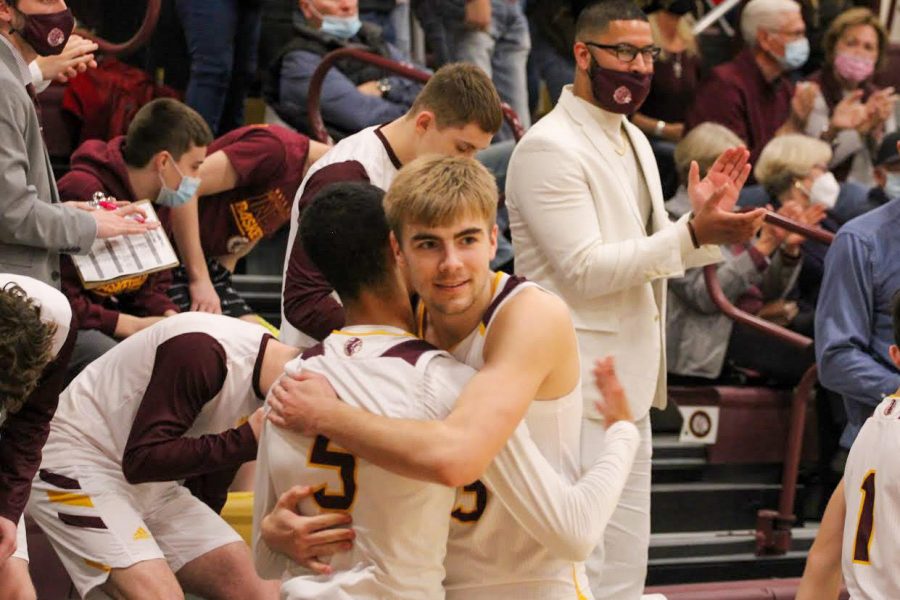 Seniors Dalyn Schwartz and Tj Nunnery embrace each other as they celebrate a win on senior night.

The Hays High Indians boys basketball team entered their final regular season game against the Great Bend Panthers on Feb. 26 with a 19-0 record and with winning the Western Athletic Conference title outright with a win over Dodge City 61-49 on Feb. 23.

At the start of the night, the Indians celebrated three seniors in the program, including seniors Jason Krannawitter, TJ Nunnery and Dalyn Schwarz.

The Indians started the game slowly while the Panthers heated up from the three-point line and beyond. The Panthers led by three at the end of the quarter, 14-11.

In the second quarter, the Indians took the lead back with the help of Nunnery creating fast-break fouls. Great Bend never let the Indians get any lay-ups up or any dunks, as they pushed the Indians off the court. Nunnery had multiple fast-break chances that led him to the line and had one final three throw chance, as Great Bend senior Sam Hall wrapped his arms around Nunnery. Nunnery made the one-and-one and made the final free throw to allow the Indians to lead 25-21 at halftime.

With an undefeated 20-0 regular season record, the Indians move on to March 3’s sub-state game against the Panthers again at home just five days after playing for the final regular season game.