Electoral college is an outdated system that needs to be revised 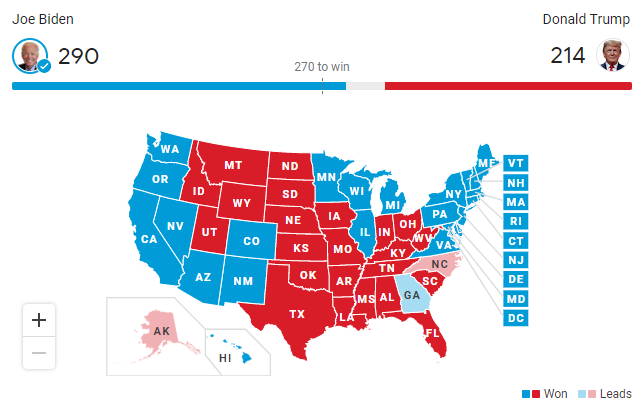 This is the electoral map for the 2020 presidential election so far. Joe Biden is the projected winner with 290 electoral votes as of now.

The electoral college is an outdated system that gives imbalanced power to voters in different states. It was never meant to be permanent part of our government; it was just a compromise the Founding Fathers developed.

At that time, they felt that the public was not educated enough to elect a president by popular vote, but if Congress was given the ability to decide the president, it could lead to corruption.

A surprising number of Americans do not really know how the system works; in fact, I did not fully understand it until this year’s election.

A very simplified explanation of the system is that every state has electors who represent a political party, and when people cast their ballots, they are actually voting for an elector to vote for the president on behalf of them.

There are 538 total electors. Each state gets a certain number of electoral votes based on how many Congressional districts they have, plus two additional votes for the state’s U.S. Senate seats. Washington, D.C., is also given three electoral votes. The candidate to get at least 270 of these votes becomes the president.

Under the electoral college, candidates either get all of a state’s electoral votes or none, with the exceptions of Maine and Nebraska, who split their electoral votes, depending on how their citizens voted.

This all or nothing approach creates swing states, which are states that have similar levels of support for each candidate and could reasonably vote for either party.

This leads candidates to spend all their time and money campaigning in swing states because the swing states pretty much determine the winner of the election.

If the electoral college were not in place, then candidates would put together a solid campaign that explains their platform, rather than spending all their time pandering to the swing states.

Historically, both major political parties have tried to get rid of the electoral college, and most people can recognize that there are flaws in the system.

In my opinion, the only reason Republicans defend the electoral college is because, in the past two elections where the president lost the popular vote but won the electoral vote, it has benefitted their party (2000 and 2016).