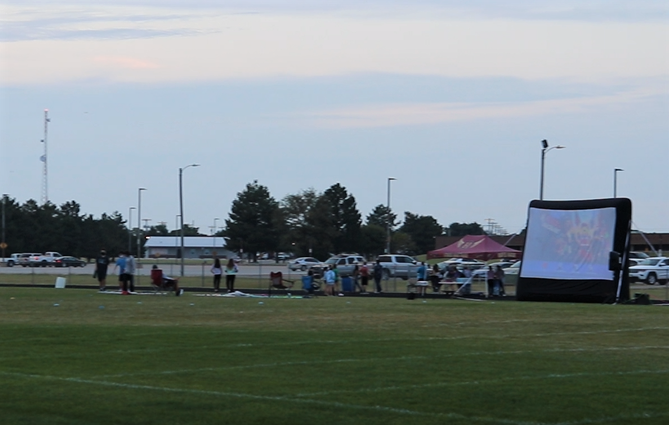 Students arrive to the StuCo movie night on Saturday evening.

The Hays High Student Council Movie Night was held on Aug. 26 from 8-11 p.m. on the football field.

“We would have liked the turnout to be a little bigger because bigger is always a little better, but it was still a nice little turnout of students,” StuCo Sponsor Alicia Brungardt said.

This back-to-school event, which featured the “Lego” movie, was the first event held by StuCo of the school year.

“The movie was funny and a good movie to watch,” junior Macy Meyers said. “I would definitely like to see another event like this take place.”

StuCo has done movie nights in the past. However, StuCo held a color run instead of a movie night last school year.

“The StuCo officers must decide how they want to spend the money raised and the little money distributed throughout the district,” Brungardt said. “It’s really up to them as far as whether we have a movie or not or a dance or not.”

Admission to get into the event was $2. Popcorn, candy, soda and suckers were also available at varying prices.

StuCo plans to do more outdoor events this year with the expectation that all mass gatherings be outside.

“Our Homecoming dance is going to be more of a festival than a dance, however, there will still be a DJ,” Brungardt said.